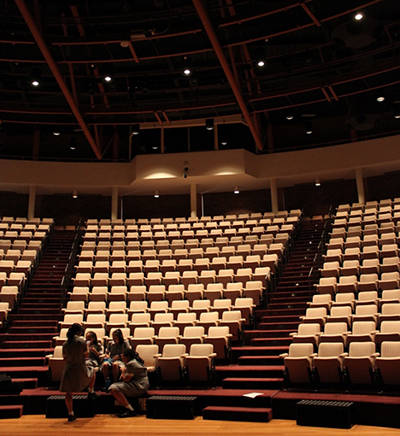 Located in Sydney, New South Wales, Australia, and originally established 1885, Abbotsleigh is an independent boarding school which provides a quality and well-balanced education. Focused on empowering their students to be courageous, constructive and compassionate, the school has been working behind the scenes on an upgrade to their concert and assembly hall lighting systems. Led by the systems integration team at Barbizon Lighting Company’s Australia office, the renovation project most recently undertook the upgrading of the house lighting systems in the concert hall using Chalice LED 150W downlights from Altman Lighting.

“We first came to this project while conducting a review of all the lighting fixtures and systems for the various venues within the school, and then preparing a schedule for renovations over a 2 to 3-year period,” began Paul Lewis, Systems Sales Director for Barbizon Lighting Company in Australia. “The overall scope involved upgrading the fixtures to LED and updating the associated control systems as well. Stage one was previously comprised of installing Altman PHX 250W LED profiles in a few difficult to service front-of-house positions, along with Spectra Cyc 100 LED fixtures installed in the main assembly hall and the concert hall. Stage two was now being able to replace the existing house and work lighting fixtures in the concert hall with the new Chalice LED.” The Chalice LED Series is the most diverse range of downlights available with mounting options that include pendant, recessed, aircraft cable, wall and yoke mount; and dimming choices ranging from Mains Dimming to DMX. Also available with a wide variety of LED color or white light options, plus numerous lens or reflector choices, the Chalice LED Series is the most versatile and easy to integrate downlight solution available today. Lewis continued, “For the replacement of the house lights in the concert hall, the main challenges were needing to utilize both the existing house light positions and the existing power infrastructure, including dimmers and mounting methods. Additionally, we had the challenge of accessing the overhead concrete slab that would prevent the installation of any new DMX infrastructure. The fittings needed to dim smoothly on mains power, plus be able to be suspended from the existing penetrations in the slab. The Chalice LED downlights were ideal for this type of job, and since we are the Altman distributors for Australia, it was a natural choice.”

With the design solution now in place, Lewis and his team got to work on the installation of the new house lighting system. Needing the system to operate efficiently within the control protocols already in place, the Chalice LED down lights offered a powerful yet simple, retrofitted lighting solution. “There are now 24 Chalice 150W Mains Dim 2700K luminaires suspended on aircraft cable in a one-for-one replacement of the tungsten fixtures from the original build,” added Lewis. “They are all being dimmed via the existing dimming system, and they are easily controlled by either the architectural, A/V, or stage lighting control system.”

Now complete, the new house lighting system inside the concert hall at Abbotsleigh is providing both the performance capabilities and the design aesthetics desired. Highlighted by its ability to work with both mains dimming and DMX protocols, Lewis is confident they found the ideal lighting solution with the Chalice LED series from Altman Lighting.

“The Altman Chalice 150 is a beautiful fixture from both a light output and industrial design perspective,” concluded Lewis. “With its single source and reflector optic, plus its clean and simple lines, the Chalice downlight allows a venue to upgrade to LED lighting using their existing infrastructure and conventional dimming, or allows a venue to control via DMX, or a combination of both. Also, the optional dimming curves available on the DMX model allow for a very smooth dimming that replicates very closely the smoothness of a fade on a tungsten lamp, minus the color shift of course.”