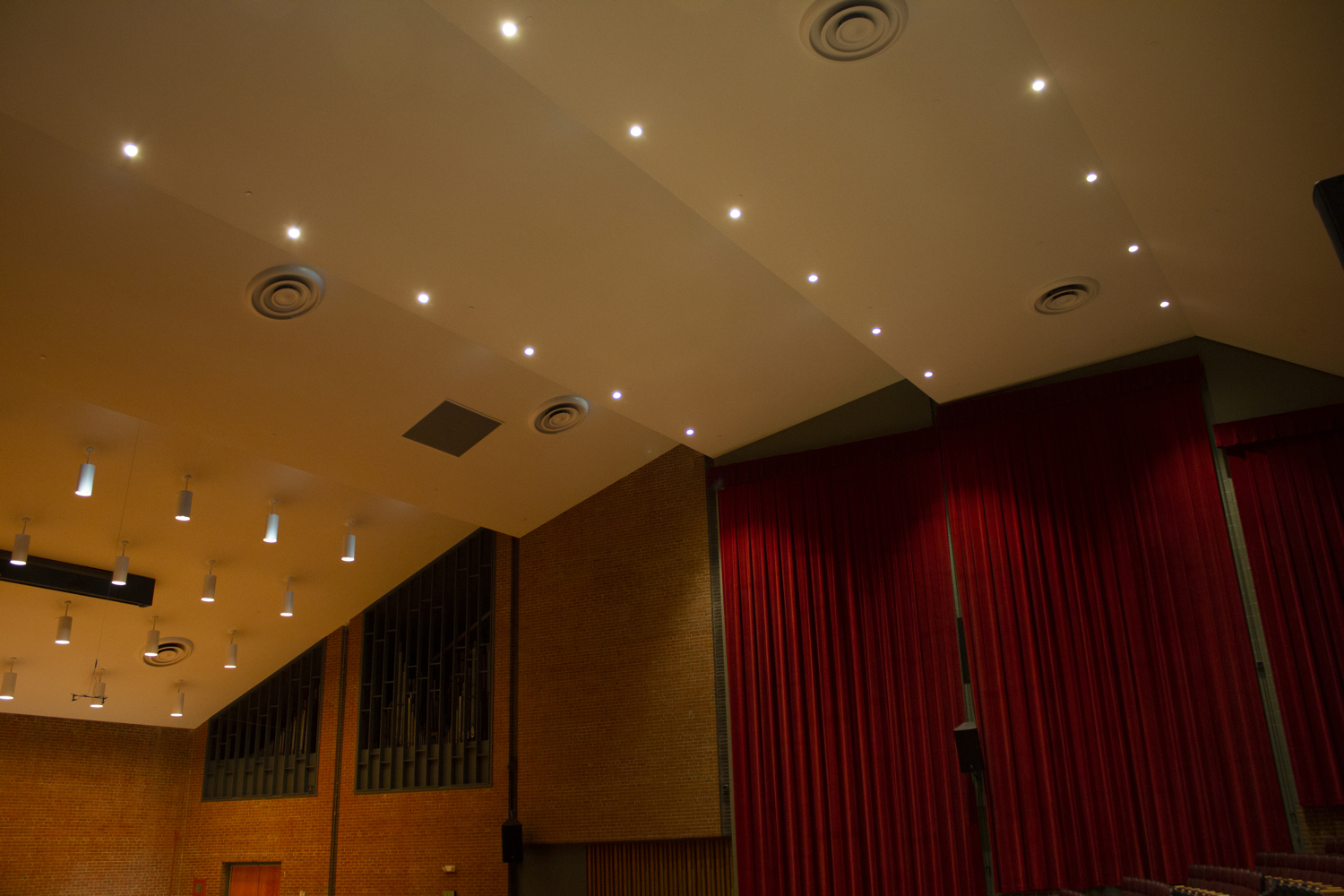 Yonkers, New York (9/18/2019) – As one of the nation’s top public universities, Towson University in Maryland has created an inclusive learning environment situated near the area’s prominent educational, community and cultural resources. From theatre to dance and music, the University’s performing arts programs produce over 200 student and professional performances each year. Needing performance venues which can keep up with the busy production schedule, they called up Pennsylvania-based Illuminated Integration to renovate the 500-seat Howard J. Kaplan Concert Hall with a new lighting system including Chalice 70W recessed downlights from Altman Lighting.”

“We were initially brought onto the project as the antiquated lighting system in the concert hall had failed from a controls perspective, and they had decided to convert the entire space to LED as well,” began Mike Birardi, Lead Design Creative, Illuminated Integration. “The targets in doing this were to reduce energy and maintenance costs while improving the overall illumination of the space without losing the architectural design aesthetics. We really tried to give them a solution that could do all those things for better performance with lower maintenance and more energy-efficient usage.”

Working with Towson University for the first time, Birardi and the team at Illuminated Integration began researching the most beneficial lighting technologies. Knowing that the University wanted to maintain the time-honored architecture of the concert hall while increasing the performance of the system behind it, he was confident in the selection of the Chalice LED downlights.

“Form-factor was a big challenge because we had to find a lighting technology that could fit the existing openings in the ceiling for the downlights,” continued Birardi. “We also wanted a technology that could be controlled via DMX with a reliable reputation. We have used the Chalice fixtures in the past and in terms of light output versus wattage, they provide a great balance plus a wide variety of optics as well.”

The Chalice LED Series is the most diverse range of downlights available with mounting options that include pendant, recessed, aircraft cable, wall and yoke mount; and dimming choices ranging from Mains Dimming to DMX. Also available with a wide variety of LED color or white light options, plus numerous lens or reflector choices, the Chalice LED Series from Altman Lighting is the most versatile and easy to integrate downlight solution available today.

“We didn’t want to damage any of the existing plaster work, so we simply pulled out the old fixtures and replaced them with the Chalice luminaires using the existing trim rings already in the ceiling,” explained Birardi. “Above the ceiling is pretty wide open so it was really the diameter of the holes that were most restrictive in the design. With the Chalice luminaires, we were able to fit the trim rings perfectly for a quick one-to-one fixture replacement in the recessed house lighting.”

With the fixtures now in place, Birardi next turned his attention to finalizing the design and establishing the new control system. Needing to achieve the most even field of light possible for the renovated performance environment, the expansive design capabilities of the Chalice luminaires proved to be a valuable asset.

“The inter-changeable optics of the Chalice luminaires are incredibly useful,” added Birardi. “While we do the lighting and beam spread calculations before each installation, it’s nice to have the ability to adjust the optics in the field. For control, we then implemented a DMX-controlled theatrical console and architectural wall stations to control the house lights, and the lumens per watt we can achieve is really quite excellent.”

Now complete and fully operational, the renovated Howard J. Kaplan Concert Hall is ready to take on the extensive Towson University production schedule. Understanding the potential behind the technologies implemented in the new design, Birardi believes the innovative system has raised the creative potential for a variety of dynamic performances.

“They were very happy with the final outcome of the new house lighting design,” concluded Birardi. “Originally, the light measurements were down into the 10-15 footcandle range, and it was very spotty. Afterwards, we are now in the 25-30 footcandle range with a beautiful, even coverage and no hot spots. This made the overall design look a lot better and it’s also made the concert hall a better option for a multitude of different live events.”